Work
☰
You are here: Work 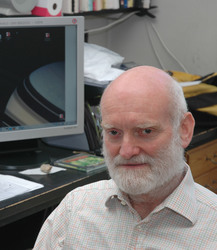 Please note: I no longer have any funds or laboratory space, so I cannot take on doctoral students or postdocs.

Research concentrates on electrochemical digital simulation; that is, the solution of Fick's diffusion equation, with the special boundary conditions given by the electrochemical context. In recent times, some of the major problems have been solved, such as that of fast homogeneous reactions, coupled reactions, and stability in this context has been examined. We now have a handle on most of these problems and the publications list reflects activity on these fronts.

We have provided accurate reference values of the current at the ultramicrodisk and ultramicroband electrodes. Recent work includes simulation of the conical well electrode, the conical-tip electrode and accurate values of fluxes at cylindrical and capped cylindrical electrodes. An excursion outside electrochemistry dealt with the dynamics of thermal gas reactions; and within electrochemistry, more efficient ways of simulating enzyme systems. A more recent publication is on the optimisation of simulations of two-dimensional systems, comparing several transformations that have been suggested, investigating multi-point spatial derivative approximations, orthogonal collocation and the eigenvalue, -vector method. Some surprises were encountered in this work. Enzyme systems have been investigated, as were some ways to compute electric field effects, surface concentrations over a disk electrode, and the use of the Saul'yev method in two dimensions. There was another excursion into another field, simulating a system of chemical reactions in a biochemical context.

The collaboration is in digital simul ation, and has been ongoing since 2000.

Faculty of Electrical and Computer Engineering, Cracow University of Technology.

Since about 1993 there has been fruitful collaboration in the field of digital simulation, especially on issues of numerical stability. This work continues.


Papers of the last 5 years, in reverse order: